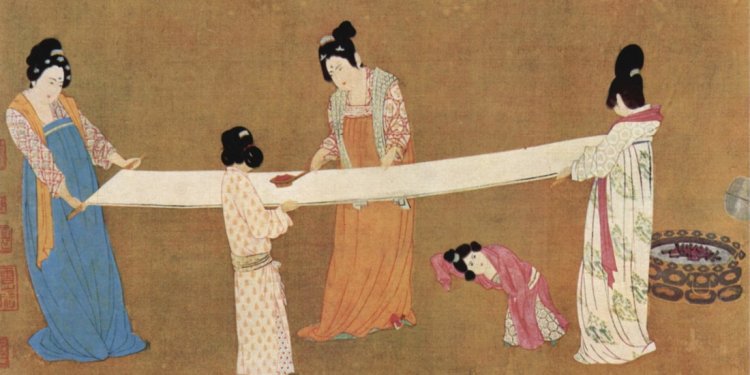 Legend has it that the process for making silk cloth was first invented by the wife of the Yellow Emperor, Leizu, around the year 2696 BC. The idea for silk first came to Leizu while she was having tea in the imperial gardens. A cocoon fell into her tea and unraveled. She noticed that the cocoon was actually made from a long thread that was both strong and soft.

Leizu then discovered how to combine the silk fibers into a thread. She also invented the silk loom that combined the threads into a soft cloth. Soon Leizu had a forest of mulberry trees for the silkworms to feed on and taught the rest of China how to make silk.

The ancient Chinese bred special moths to produce the quality silk they wanted. Here are the steps in the process for making silk:

Silk became a prized export for the Chinese. Nobles and kings of foreign lands desired silk and would pay high prices for the cloth. The emperors of China wanted to keep the process for making silk a secret. Anyone caught telling the secret or taking silkworms out of China was put to death.

The Chinese managed to keep silk a secret for over 1000 years. However, in 550 AD the secret of silk became known to other countries when two monks from the Byzantine Empire managed to smuggle some silkworm eggs out of the country. They hid the eggs inside of their bamboo walking sticks.

Take a ten question quiz about this page.

For more information on the civilization of Ancient China: