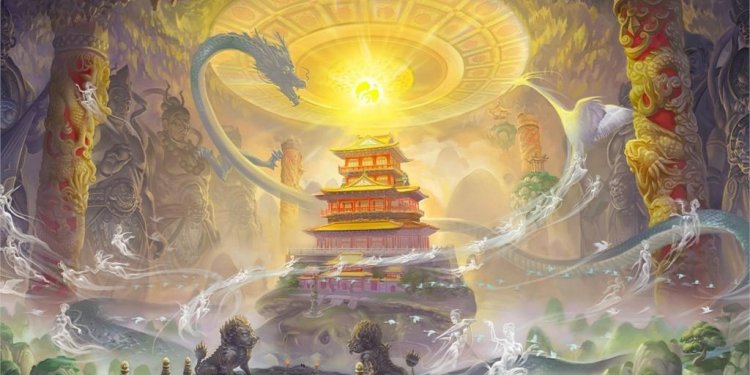 The painting of Rinzai Gigen entered the Freer collection at the turn of the 20th century as a hanging scroll but was later remounted on to a panel. Unfortunately, the wooden core of the panel was constructed of pine wood that produced damaging acidic staining as it aged, threatening the safety of the painting. The painting surface was soiled with losses in its paper support and darkened inpainting which detracted from its appearance. The surrounding mounting fabrics, a silk damask and a gold-threaded brocade, were soiled and worn. As well, the top and bottom sections of the silk damask were trimmed when the painting was remounted on to a panel, making these fabrics too small to be reused.

Before Treatment
The worn, soiled and unstable painting had been remounted on to a panel. The old mounting fabrics were cut down at the top and bottom of the mounting.

After Treatment
The painting is stable, cleaner and old damage is less noticeable. The mounting has been remade into the longer, traditional hanging scroll format.

For these reasons, conservators decided the painting should undergo a major conservation treatment: removal from the acidic panel, cleaning, repair and replacement of old paper linings, and remounting with new fabrics to recreate the original hanging scroll format.

The surface of the Rinzai Gigen painting was soiled with discolored patches. Also notice the raised, light lines caused by paper reinforcement strips applied during a previous treatment.

During treatment, old lining papers were carefully removed to reveal the back of the painting paper support. .

During the initial stages of conservation treatment, fiber samples from the painting were sent to paper technology experts at the Kochi Paper Research Institute in Japan. Fiber analysis was performed to determine the material content of the paper support. This information was used to guide production of handmade repair paper that matched the painting support as closely as possible in both physical characteristics and appearance. Both criteria are vital to the structural stability and visual unity when repairing an artwork. Conservators in the East Asian Painting Conservation Studio (EAPCS) used pigments to tone the 100% paper mulberry fiber (Jp: kōzo) paper before using it to mend losses in the painting support.

Losses and insect damage in the painting were revealed once the lining was removed.

Repair paper produced by the Kochi Paper Research Institute. The brown paper in the foreground has been pigment dyed before being used to repair losses.

Research and Reproduction of Mounting Fabrics

The second conservation concern was the old mounting fabrics for the portrait of Rinzai Gigen, which had been cut down and could not be reused to remount the painting as a hanging scroll. After discussion with curators and conservators in Japan and the Freer Gallery, it was decided to reproduce the fabrics that had been used for the middle and outer borders of the mounting. EAPCS conservators worked closely with Mr. Kenji Hirose of the Hironobu Textile Company to reproduce the mounting fabrics. Over a period of many months, the weave structure and pattern of each fabric was translated to suit modern looms, and appropriate colors were chosen from numerous samples.

The original gold brocade (left, foreground) and the reproduced fabic used for remounting the painting (above).

The color and width of the new gold threads were selected to match the tone and character of the original fabric.

The pattern to reproduce the gold brocade (back ground) and the pattern cards used to weave the fabric on a Jacquard loom.

The two-color brocade used for the outer border of the mounting. Original fabric (below) and reproduction (above).

The generous grant from the Sumitomo Foundation supported the production of custom repair paper and mounting fabrics in Japan that were essential for the successful conservation treatment of four important Freer collection paintings. The newly produced materials enabled conservators to maintain the historical context and mounting aesthetic of each artwork, while restoring the structural stability of the paintings and enhancing the overall impact of the painted images. This conservation project also allowed Freer Gallery and Asian conservators, scientists, and scholars the opportunity to collaborate and conduct research on traditional Asian textile used in mounting.