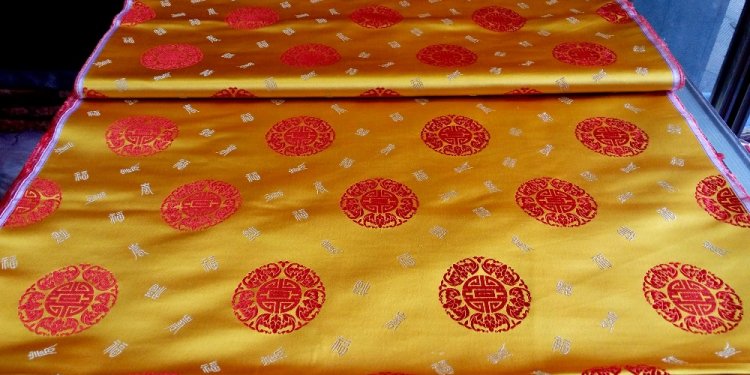 The exquisite appearance of silk made silkworm raising and silk manufacture an important sophisticated handcraft industry in ancient China; its popularity ushered in a new age for the national silk fabric culture. Historically, silk trade had often played an important role in forging the economic and cultural union of east and west, and it also encouraged social development to some extent.

Experiencing four cycles of dormancy and exuviation as it grows, a small silkworm will ultimately become a silkworm moth, flying into the sky. Before maturity, however, the silkworm has to spin its silk and wrap itself in its pod. Artificially, its pod is placed in hot water to make it into a soft, pulpy mixture until the dirty surface layer is shed, allowing the silk thread to finally be released.

History
Originating in China, silk appeared as early as the middle Neolithic Age, about five to six thousand years ago. In the Shang Dynasty (16th - 11th century BC), silk production in China had begun to take shape, employing complicated loom and some simple weaving techniques. From the time of the Warring States to the Han Dynasty (206 BC – 220 AD), silk production experienced steady development throughout China. The silk industry applications then consisted of thin silk, open-work silk and brocade. The emergence of brocade is a milestone in the silk history. Brocade combines silk's excellent capabilities with art, and thus silk is not only the noblest of clothing materials; it is also a piece of art. Especially in the Han Dynasty, while there was growing development of economic and cultural ties between China and its neighboring countries, China's silk trade and exports flourished as never before; this led to the establishment of the renown Silk Road. By the time of the Tang Dynasty (618 - 907), silk production had peaked, with both quality and quantity reaching unprecedented levels. During the Song (960 - 1279) and Yuan (1271 - 1368) Dynasties, silkworm technology was progressed further, the color and varieties of silk increased, culminating in the Song Brocade and ornamental gold fabrics. In the Ming (1368 - 1644) and Qing (1644 - 1911) Dynasties, under the double blow of exorbitant internal taxes and miscellaneous levies together with silk dumping by foreign countries, silk production sunk to a low ebb. Since the founding of New China, silk production has entered a new period of development, with China silk products now being sold to over 100 countries.

Characteristics
Firstly, comfort. Composed of fibroin fibre, it has good biological compatibility with the human body. Besides having a smooth surface, the coefficient of friction between silk and the human body is the lowest of all the fibres.

Secondly is its capacity to absorb and release moisture. Because of its cellularity, it is easier to diffuse the water molecules. It can absorb, release, and even repel atmospheric water vapour. Coupled with these properties, the large amount of air in the interstices between the water molecules gives it good insulation properties.

Thirdly it is capable of absorbing sound and dirt.

How to choose silk?
1. Look - to see if the luster of the material is soft and bright; if the color is well-distributed and brilliant; if there are broken silk threads and other defects.

3. Friction - when dry genuine silk is dragged along a surface, it will send out light ringing voice.

4. Fire - by taking out a small bound of silk, and then igniting it to see if it burns slowly, it should give out an odour similar to that of burnt hair or birds feathers; after being burnt, it forms a dark brown ball, and once touched, it will disintegrate into powder at once; once the flame is extinguished, the silk will stop burning almost instantly.

How to maintain it?
Where used for expensive clothing materials and exquisite decorations, artistic handicrafts and fine souvenirs, silk fabrics surely need to be well maintained. Some of the common methods of care are: dark colored and light colored silk materials should be washed separately; washing by hand is preferred, with the water temperature kept below 30 degrees celsius (86 F); ironing should only be attempted when the material is completely dry, and the iron temperature should be kept within the range of 100 and 180 degrees centigrade (212 - 356 F); before storing, fold the articles well, but mothballs are unnecessary.

Song Brocade - thriving in the Song Dynasty, hence its name. It was specially produced to meet the need of the court dresses and the paperhanging of some precious calligraphy mounting. With wide themes and varied patterns, Song Brocade is soft of texture, bright of color and luster, its patterns are elegant, and it is full of ancient and national styles. It is now mainly produced in Hangzhou, Huzhou and Suzhou, used for paperhanging.