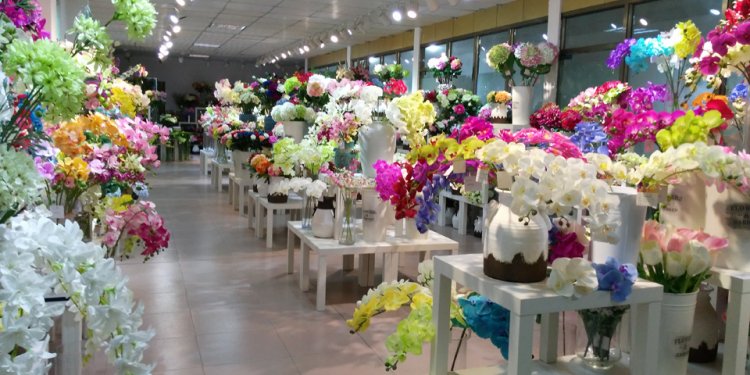 Silk and other artificial flowers manufactured today are breathtakingly real and must be touched if they are to be distinguished from nature's own. Silk trees bring the outdoors into sterile offices, and flower arrangements change the color and feel of a room for a relatively small investment. Hobbyists find them a joy to work with and take pleasure in completing arrangements that make beautiful, lasting gifts and ornaments.

The vast improvements in the quality of artificial flowers as well as lifestyles that demand carefree home decorating accessories have caused a flowering of the artificial flower industry into a multi-billion-dollar business. Many of the individual flowers, stems, and foliage are now imported from Thailand, China, and Honduras where the intensive hand labor can be acquired more readily.

Faux flowers allow home decorators to defy the seasons, not only by having summer blooms in the dead of winter but by mixing flowers from several seasons in a single display. Some manufacturers use real materials to enhance silk flowers, such as inserting artificial branches in real tree trunks. Real touches are also added to the false flora; leaves may have holes that look like insect damage, silk roses are complete to the thorns, and some fabulous fakes are even fragrant. Their ultimate attraction may be their least natural aspects; these plants don't need water, fertilizer, sunlight, or tender care.

Florists call silk and other artificial flowers "permanent botanicals, " and for many years, they looked down on both dried flowers and artificial flowers as inferior. Today, silk flowers are prized for their versatility and are used by florists to enhance live plants and mingle with cut blossoms. This tradition is hundreds of years old and is believed to have been started by the Chinese who mastered the skills of working with silk as well as creating elaborate floral replicas. The Chinese used artificial flowers for artistic expression, but they were not responsible for turning silk flower-making into a business.

As early as the twelfth century, the Italians began making artificial florals from the cocoons of silkworms, assembling the dyed, velvety blooms, and selling them. The French began to rival their European neighbors, and, by the fourteenth century, French silk flowers were the top of the craft. The French continued to improve both fabrics and the quality of flowers made from them. In 1775, Marie Antoinette was presented with a silk rosebud, and it was said to be so perfect that it caused her to faint. The Revolution that ended Marie Antoinette's reign also dispatched many French flower artisans to England, and, by the early 1800s, English settlers had taken the craft with them to America.

The Victorian Age was the setting for a true explosion in floral arts, including both living and artificial varieties. The Victorians favored an overdone style of decor in which every table and mantelpiece bore flowers or other ornaments. Flowers were so adored that "the language of flowers" grew to cult status in which floral bouquets carried messages and meanings. During the mid- to late-1800s, artificial flowers were made of a wider variety of materials than any time before

The manufacture of high-quality artificial flowers made of silk, rayon, or cotton involves die-cutting each petal size from the chosen fabric, hand dyeing the petals, and then molding the petals to create a life-like effect. Wires are inserted by hand after the petals are pressed. Each flower is assembled individually, and once complete, the flowers are wrapped in florist's paper, and the stems are placed in boxes as if they are to be delivered like a bouquet of real flowers.

or since. Fabrics included satin, velvet, calico, muslin, cambric, crepe, and gauze. Other materials included wood, porcelain, palm leaves, and metal. Wax flowers were popular and became their own art form, and flowers were even made of human hair especially to commemorate deceased loved ones.

In the United States, lavish arrangements and apparel made use of permanent botanicals. The Parisian Flower Company, which had offices in both New York and Paris, supplied silk flowers and other artificial florals to milliners, makers of bridal and ball gowns, and other dressmakers, as well as for room decoration. They sold separate stems and arrangements that were either pre-made or commissioned. By 1920, florists began to add them to their products and services to cover those times when cut blossoms were in short supply.

The trend toward wreaths and ornaments using false fruit in the Italian della Robbia style flourished in the 1920s and 1930s and waned by 1940. Celluloid became a popular material for flowers in the 1940s, but the highly flammable flowers were banned from importation from Japan after several disastrous fires. Plastic soon overwhelmed the industry, however, and is still responsible for its versatility in the 1990s. Inexpensive plastics to realistic silk blossoms offer something for everyone.