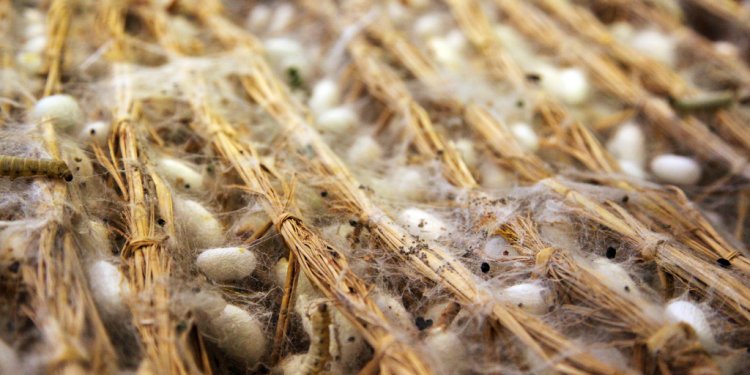 (Sogdian silk, 8th century) Sericulture or silk production has a long and colorful history unknown to most people. For centuries the West knew very little about silk and the people who made it. Pliny, the Roman historian, wrote in his Natural History in 70 BC "Silk was obtained by removing the down from the leaves with the help of water". For more than two thousand years the Chinese kept the secret of silk altogether to themselves. It was the most zealously guarded secret in history.

Chinese legend gives the title Goddess of Silk to Lady Hsi-Ling-Shih, wife of the mythical Yellow Emperor, who was said to have ruled China in about 3000 BC. She is credited with the introduction of silkworm rearing and the invention of the loom. Half a silkworm cocoon unearthed in 1927 from the loess soil astride the Yellow River in Shanxi Province, in northern China, has been dated between 2600 and 2300 BC. Another example is a group of ribbons, threads and woven fragments, dated about 3000 BC, and found at Qianshanyang in Zhejiang province. More recent archeological finds - a small ivory cup carved with a silkworm design and thought to be between 6000 and 7000 years old, and spinning tools, silk thread and fabric fragments from sites along the lower Yangzi River reveal the origins of sericulture to be even earlier.

SILKWORM AND THE FAMILY

There are many indigenous varieties of wild silk moths found in a number of different countries. The key to understanding the great mystery and magic of silk, and China's domination of its production and promotion, lies with one species: the blind, flightless moth, Bombyx mori. It lays 500 or more eggs in four to six days and dies soon after. The eggs are like pinpoints one hundred of them weigh only one gram. From one ounce of eggs come about 30, 000 worms which eat a ton of mulberry leaves and produce twelve pounds of raw silk. The original wild ancestor of this cultivated species is believed to be Bombyx mandarina Moore, a silk moth living on the white mulberry tree and unique to China. The silkworm of this particular moth produces a thread whose filament is smoother, finer and rounder than that of other silk moths. Over thousands of years, during which the Chinese practiced sericulture utilizing all the different types of silk moths known to them, Bombyx mori evolved into the specialized silk producer it is today; a moth which has lost its power to fly, only capable of mating and producing eggs for the next generation of silk producers.

THE SECRET OF SERICULTURE

Producing silk is a lengthy process and demands constant close attention. To produce high quality silk, there are two conditions which need to be fulfilled preventing the moth from hatching out and perfecting the diet on which the silkworms should feed. Chinese developed secret ways for both.

* The eggs must be kept at 65 degrees F, increasing gradually to 77 degrees at which point they hatch. After the eggs hatch, the baby worms feed day and night every half hour on fresh, hand-picked and chopped mulberry leaves until they are very fat. Also a fixed temperature has to be maintained throughout. Thousands of feeding worms are kept on trays that are stacked one on top of another. A roomful of munching worms sounds like heavy rain falling on the roof. The newly hatched silkworm multiplies its weight 10, 000 times within a month, changing color and shedding its whitish-gray skin several times.

*The silkworms feed until they have stored up enough energy to enter the cocoon stage. While they are growing they have to be protected from loud noises, drafts, strong smells such as those of fish and meat and even the odor of sweat. When it is time to build their cocoons, the worms produce a jelly-like substance in their silk glands, which hardens when it comes into contact with air. Silkworms spend three or four days spinning a cocoon around themselves until they look like puffy, white balls.

*After eight or nine days in a warm, dry place the cocoons are ready to be unwound. First they are steamed or baked to kill the worms, or pupas. The cocoons are then dipped into hot water to loosen the tightly woven filaments. These filaments are unwound onto a spool. Each cocoon is made up of a filament between 600 and 900 meters long! Between five and eight of these super-fine filaments are twisted together to make one thread.

*Finally the silk threads are woven into cloth or used for embroidery work. Clothes made from silk are not only beautiful and lightweight, they are also warm in cool weather and cool in hot weather.

Literary sources such as The Book of History, and The Book of Rites give further information about sericulture. Reeling silk and spinning were always considered household duties for women, while weaving and embroidery were carried out in workshops as well as the home. In every silk-producing province the daughters, mothers and grandmothers of every family devoted a large part of the day for six months in a year to the feeding, tending and supervision of silkworms and to the unraveling, spinning, weaving, dyeing and embroidering of silk.

By the fifth century BC, at least six Chinese provinces were producing silk. Each spring, the empress herself inaugurated the silk-raising season, for silk production was the work of women all over China. The technique and process of sericulture were guarded secrets and closely controlled by Chinese authorities. Anyone who revealed the secrets or smuggled the silkworm eggs or cocoons outside of China would be punished by death.

When silk was first discovered, it was reserved exclusively for the use of the ruler. It was permitted only to the emperor, his close relations and the very highest of his dignitaries. Within the palace, the emperor is believed to have worn a robe of white silk; outside, he, his principal wife, and the heir to the throne wore yellow, the color of the earth.

Gradually the various classes of society began wearing tunics of silk, and silk came into more general use. As well as being used for clothing and decoration, silk was quite quickly put to industrial use by the Chinese. This was something which happened in the West only in modern times. Silk, indeed, rapidly became one of the principal elements of the Chinese economy. Silk was used for musical instruments, fishing-lines, bowstrings, bonds of all kinds, and even rag paper, the word's first luxury paper. Eventually even the common people were able to wear garments of silk.