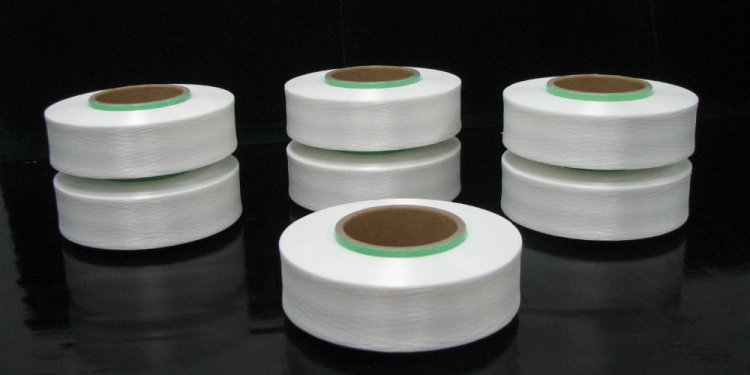 
Spandex is a lightweight, synthetic fiber that is used to make stretchable clothing such as sportswear. It is made up of a long chain polymer called polyurethane, which is produced by reacting a polyester with a diisocyanate. The polymer is converted into a fiber using a dry spinning technique. First produced in the early 1950s, spandex was initially developed as a replacement for rubber. Although the market for spandex remains relatively small compared to other fibers such as cotton or nylon, new applications for spandex are continually being discovered.

Spandex is a synthetic polymer. Chemically, it is made up of a long-chain polyglycol combined with a short diisocyanate, and contains at least 85% polyurethane. It is an elastomer, which means it can be stretched to a certain degree and it recoils when released. These fibers are superior to rubber because they are stronger, lighter, and more versatile. In fact, spandex fibers can be stretched to almost 500% of their length.

The primary use for spandex fibers is in fabric. They are useful for a number of reasons. First, they can be stretched repeatedly, and will return almost exactly back to original size and shape. Second, they are lightweight, soft, and smooth. Additionally, they are easily dyed. They are also resilient since they are resistant to abrasion and the deleterious effects of body oils, perspiration, and detergents. They are compatible with other materials, and can be spun with other types of fibers to produce unique fabrics, which have characteristics of both fibers.

Spandex is used in a variety of different clothing types. Since it is lightweight and does not restrict movement, it is most often used in athletic wear. This includes such garments as swimsuits, bicycle pants, and exercise wear. The form-fitting properties of spandex makes it a good for use in under-garments. Hence, it is used in waist bands, support hose, bras, and briefs.

The development of spandex was started during World War II. At this time, chemists took on the challenge of developing synthetic replacements for rubber. Two primary motivating factors prompted their research. First, the war effort required most of the available rubber for building equipment. Second, the price of rubber was unstable and it fluctuated frequently. Developing an alternative to rubber could solve both of these problems.

At first, their goal was to develop a durable elastic strand based on synthetic polymers. In 1940, the first polyurethane elastomers were produced. These polymers produced millable gums, which were an adequate alternative to rubber. Around the same time, scientists at Du Pont produced the first nylon polymers. These early nylon polymers were stiff and rigid, so efforts were begun to make them more elastic. When scientists found that other polyurethanes could be made into fine threads, they decided that these materials might be useful in making more stretchable nylons or in making lightweight garments.

The first spandex fibers were produced on an experimental level by one of the early pioneers in polymer chemistry, Farbenfabriken Bayer. He earned a German patent for his synthesis in 1952. The final development of the fibers were worked out independently by scientists at Du Pont and the U.S. Rubber Company. Du Pont used the brand name Lycra and began full scale manufacture in 1962. They are currently the world leader in the production of spandex fibers.

A variety of raw materials are used to produce stretchable spandex fibers. This includes prepolymers which produce the backbone of the fiber, stabilizers which protect the integrity of the polymer, and colorants.

Two types of prepolymers are reacted to produce the spandex fiber polymer back-bone. One is a flexible macroglycol while the other is a stiff diisocyanate. The macro-glycol can be a polyester, polyether, polycarbonate, polycaprolactone or some combination of these. These are long chain polymers, which have hydroxyl groups (-OH) on both ends. The important feature of these molecules is that they are long and flexible. This part of the spandex fiber is responsible for its stretching characteristic. The other prepolymer used to produce spandex is a polymeric diisocyanate. This is a shorter chain polymer, which has an isocyanate (-NCO) group on both ends. The principal characteristic of this molecule is its rigidity. In the fiber, this molecule provides strength.

Corset designed by Jacob Kindliman of New York City in 1890.

This corset-clad torso was produced by Jacob Kindliman of New York City in 1890. Kindliman, a corsetiere, hardly needed to advertise. At that time, women thought it was necessary to wear a corset and considered themselves indecently dressed without it until early in the twentieth century. Corsets were a combination brassiere-girdle-waist cincher in an all-in-one garment, forming the foundation shape for fashionable dress.

In days before spandex, how did the corset contour the body effectively? In the eighteenth century, thick quilting and stout seams on the corset shaped the body when the garment was tightly laced. In the early nineteenth century, baleen, a bony but bendable substance from the mouth of the baleen whale, was sewn into seams of the corset (hence the term whalebone corsets), however the late 1800s corsets like this were stiffened with small, thin strips of steel covered with fabric. Such steel-clad corsets did not permit movement or comfort. By World War I, American women began separating parts of the corset into two garments—the girdle (waist and hip shaper) and bandeau (softer band used to support and shape the breasts).

When the two types of prepolymers are mixed together, they interact to form the spandex fibers. In this reaction, the hydroxyl

groups (-OH) on the macroglycols react with the isocyanates. Each molecule gets added on to the end of another molecule, and a long chain polymer is formed. This is known as a step-growth or addition polymerization. To initiate this reaction, a catalyst such as diazobicyclo[2.2.2]octane must be used. Other low molecular weight amines are added to control the molecular weight of the fibers.

Spandex fibers are vulnerable to damage from a variety of sources including heat, light atmospheric contaminants, and chlorine. For this reason, stabilizers are added to protect the fibers. Antioxidants are one type of stabilizer.

Various antioxidants are added to the fibers, including monomeric and polymeric hindered phenols. To protect against light degradation, ultraviolet (UV) screeners such as hydroxybenzotriazoles are added. Compounds which inhibit fiber discoloration caused by atmospheric pollutants are another type of stabilizer added. These are typically compounds with tertiary amine functionality, which can interact with the oxides of nitrogen in air pollution. Since spandex is often used for swimwear, antimildew

additives must also be added. All of the stabilizers that are added to the spandex fibers are designed to be resistant to solvent exposure since this could have a damaging effect on the fiber.
Source: www.madehow.com