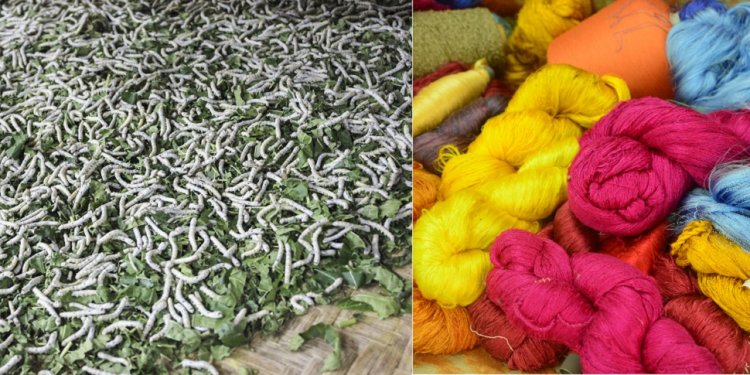 Where is silk grown?

Silk - the most beautiful of all textile fibers is acclaimed as the queen of textiles. It comes from the cocoon of the silk worm and requires a great deal of handling and processing, which makes it one of the most expensive fibers also. Today China is the leading silk producer of the world. Other major silk producing countries include Japan, India and Italy.

The Silk Worm
Production of Silk from Cocoon to Factory
Sericulture: The production of cocoon for their filament is called sericulture. The species Bombyx mori is usually cultivated and is raised under controlled condition of environment and nutrition. The life cycle of silk worm encircle in the four stages. The egg, the silk worm, the pupa and the moth. The silk worm which feeds on mulberry leaves forms a covering around it by secreting a protein like substance through its head.

Filature operations: The cocoons raised by the farmer are delivered to the factory, called a filature, where the silk is unwound from the cocoons and the strands are collected into skeins. Some cocoons are scientifically bred in such factories. The filature operations consist of the following stages.

a) Sorting cocoons :
The cocoons are sorted according to the color, size, shape and texture as these affect the final quality of the silk. Cocoons may range from white and yellow to grayish.

b) Softening the Sericin : Silk filament is a double strand of fibroin, which is held together by a gummy substance called sericin or silk gum. After the cocoon has been sorted, they are put through a series of hot and cold immersions, as the sericin must be softened to permit the unwinding of the filament as one continuous thread.

c) Reeling the filament : Reeling is the process of unwinding the silk filaments from the cocoon and combining them together to make a thread of raw silk. As the filament of the cocoon is too fine for commercial use, three to ten strands are usually reeled at a time to produce the desired diameter of raw silk which is known as "reeled silk". The useable length of reeled filament is 300 to 600 m.

d) Bailing : The silk filament is reeled into skeins, which are packed in a small bundles called books, weighting 2 to 4.5 kg. These books are put into bales weighing about 60 kg. In this form raw silk is shipped to silk mills all over the world.

Silk is very strong in terms of tensile strength, meaning it can withstand a lot of pulling type pressure without breaking. This should not, however, be confused with wear ability or abrasion resistance. Silk will not stand up to the heavy wear that other fibers will.

Silk can take on many different appearances. A raw silk fabric may fool you into thinking that it is cotton or synthetic. The more refined the silk and the smaller the yarn, the more it resembles the look and feel that we know as silky.

Silk is a protein fiber like wool. This gives it many of its characteristics. It is sensitive to a range of chemical situations and cannot withstand prolonged exposure to either high alkalinity or to acid or oily soils. It will become brittle with age and exposure to sunlight.

Out of the numerous species of silk moths, scientists have enumerated about 70 silk moths which are of some economic value. But of these only a very few have commercial value. The four commercially known varieties of natural silk are (1) Mulberry silk (2) Tasar silk (3) Muga silk and (4) Eri silk. Although the bulk of world silk supply comes from the silk moth Bombyx Mori which is domesticated, the other varieties of silk are known as wild silk, as they are grown in remote forest trees in natural conditions.