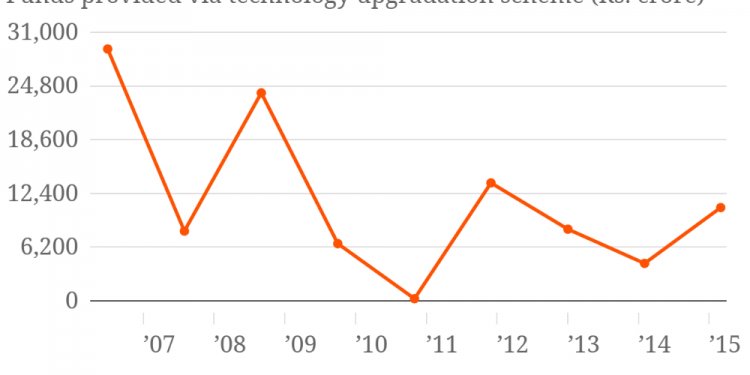 The sight is a familiar one in Bombay. Crowds of people jostle each other in unruly queues outside the city's textile mills, all of them competing for a single vacancy. Inside, bales of cloth pile up, stored in make-shift shelters, waiting for somebody to buy them. The employees work uncertainly confused by the management's indecisiveness and worried that they too will soon join the thousands of jobless textile workers. Harassed mill-owners make desperate phone calls attempting to raise day-to-day finance and trying hard to decide whether it is worth continuing production. Elsewhere, insecure investors sell their textile shares and move their capital to safer investments and at Moolji Jaitha Market, centre of the wholesale trade, an unreal air of slackness and inertia pervades what once used to be a buzzing hive of activity. The message is painfully clear-the textile industry has never had it so bad.

And yet, strangely enough, as little as two years ago it seemed as though textiles were riding an ever expanding boom. Production increased, the market absorbed everything the mills could come up with, profits skyrocketed and share prices soared to extravagantly high levels. Grandiose expansion schemes were embarked upon and the euphoric magnates seemed convinced that after years of tribulation they were financially on the yellow brick road. What went wrong?

There is no shortage of explanations for the present crisis. Official sources hold mismanagement responsible; labour leaders attribute it all to a conspicuous lack of reinvestment; cotton growers blame the weather; wholesalers put it all down to the rate of interest and the mill-owners do a near balancing act between blaming it all on government intervention and at the same time asking for government finance.

This hasty search for convenient scapegoats, however, ignores the fact that doom has always been predicted for the industry. As early as 1951, before the phrase "sick mill" became an integral part of textile jargon, the First Five-Year Plan recognized the existence of 150 uneconomic units. An industry with a vital dependence on agricultural harvest, a high labour to capital ratio, a rapidly changing market, an enforced controlled cloth obligation and what is seen as an outmoded structure of management cannot continue to exist in its present form indefinitely. Textiles have always been a low profit sector and the industry's doom-watchers were quick to point out that the 1973-74 boom was no more than a flash in the pan, being based as it was, on few structural changes within the industry. With that freak year over, the industry with its shaky foundations promptly buckled over when fresh economic tremors shook it.

The first of these was the price of cotton. The industry has traditionally had problems with its raw materials. Whereas cotton has been replaced by cheaper synthetics in most of the developed world, India imposes stiff duties on man-made fibres to protect the cotton textile and handloom sectors, with the effect that synthetics cost more than cottons. This makes a considerable section of the industry dependent on the cotton harvest and therefore on the weather. Moreover, the cost of cotton accounts for roughly 55 per cent of the total costs of production making the price of textiles extremely responsive to variations in cotton prices. The recent shortage of cotton and the spurt in its price has therefore played havoc with the industry's pricing programmes.

It has been estimated that the cost of modernizing the textile industry's equipment would be Rs. 1, 000 crores over a phased programme extending over seven years. Much of the machinery presently in use is obsolete and inefficient and production costs have been further pushed up by power cuts in several states. To make matters worse, this machinery is only geared to the production of cotton textiles and cannot be used for manufacturing synthetics. Market research has shown that the demand for synthetics is on the rise while that for cotton is dropping.

Much of the blame for the sorry state of the industry's equipment is laid at the door of top management. "Far too many mill-owners siphoned off the profits during the boom years, " Ashok Piramal, managing director of the Morarji Goculdas Group told India Today. "The main reason we are profitable today and others are not is that we were careful to regularly re-invest." A lack of re-investment is just one of the criticisms official and labour sources direct at textile management. The industry is still run like a collection of family businesses and the primary qualification possessed by many managers is the fact that their fathers own the mills. There is little professional management in the textile industry outside of the large groups and very little delegation of authority. Hereditary managers counter such criticism on the grounds that they "have textiles in their blood" and point to the failure of professional managers to revive sick units, to back up their contention that professional management is not necessarily better.

Many mill-owners see the rising cost of labour as being one of the industry's chief problems. "There is -no system of linking wages to productivity, " said Nirmal Ruia, managing director of Dawn Mills. "This has meant that we have had to pay out higher wages without having more to sell. Fortunately, with the discipline of emergency, labour action and strikes are not such a problem, but nevertheless they were contributing factors to the present crisis. Indeed the production of cloth by mills has hardly increased; it was 4, 205 million metres in 1952 and reached only 4, 316 million metres at the height of the last boom; the expansion having been in the disorganized powerloom sector. For their part, trade unionists attribute much of the crisis to managerial incompetence and deliberate mismanagement by industrialists more concerned with kick-backs and illegally siphoned-off funds rather than the company's profit and loss account.

As the crisis assumes even larger proportions, the industry is attempting desperately to seek more finance. The need is not only for short-term finance to keep it going but also long-term finance to enable it to buy new machinery and shift to more profitable lines of manufacture. This finance, however, is not forthcoming. Textiles has always been a low profit industry-the Reserve Bank, has estimated its rate of gross profit between 1968-69 to 1972-73 as being between 4.4 per cent and 6.9 per cent compared to an average of 8.8 per cent and 10 per cent for all other industries. With the present crisis, even that low return has been wiped out. This has had the effect of scaring away prospective investors who would rather put their money in safer and more lucrative investments. The high rate of interest on deposits compares conversely with the industry's miserable low dividends and the prices of textile shares have dropped considerably. Banks have lost crores of rupees in trying to save sick mills and ?.re now reluctant to risk any more capital, while institutions set up by the government to provide credit, charge interests rates of above 18 per cent and insist on convertability of their loans into shares should the mill become profitable. "The industry's problem is that very few people think it has much of a future, " Arvind Dalai of Chemanlal Dalal and Co., a firm of finance and stock brokers told India Today, "And the high rate of interest makes it difficult for it to raise funds from even the few who have faith in its prospects."