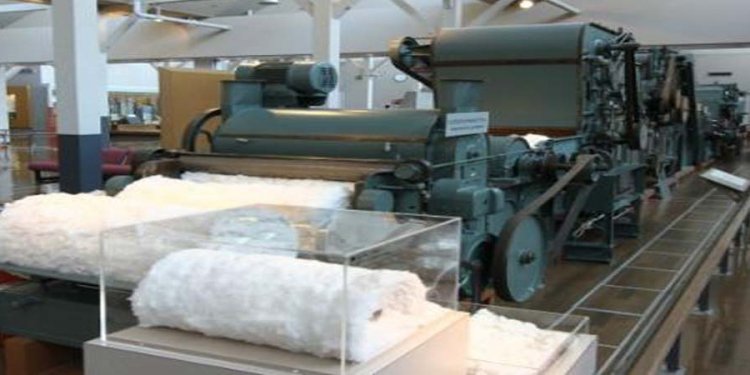 The United Kingdom experienced a huge growth in the cotton industry during the Industrial Revolution. The factories that were required to produce cotton became a legacy of the time – Sir Richard Arkwright at Cromford built the world’s first true factory to produce cotton. With an ever increasing population and an ever-expanding British Empire, there was a huge market for cotton and cotton factories became the dominant feature of the Pennines.

The factories also needed a work force and the population in the northern cities provided this, especially as many families had been engaged in the domestic system prior to the industrialisation that occurred in the north. There was therefore a ready supply of skilled weavers and spinners.

Liverpool, a rapidly expanding port, also provided the region with a means of importing raw cotton from the southern states of America and exporting finished cotton abroad. The internal market was well served with decent transport means, especially when the railways extended from London to the north.

Of great importance to the cotton industry was the repeal in 1774 of a heavy tax that was charged on cotton thread and cloth made in Britain.

Combined with all the above factors were numerous inventions that transformed the British cotton industry and helped to make the UK the ‘workshop of the world’.

In 1733, John Kay invented the ‘Flying Shuttle’. This invention allowed wider cloth to be weaved and at a faster speed than before. Kay used his knowledge as a weaver to develop this machine.

In 1765, James Hargreaves invented the ‘Spinning Jenny’. Within twenty years the number of threads one machine could spin rose from six to eighty.

In 1769, Richard Arkwright patented the ‘Water Frame’. This, as its title would suggest, used water as a source of power but it also produced a better thread than the spinning jenny.

In 1779, Crompton’s ‘Mule’ was invented. This combined the good points of the water frame and the spinning jenny and resulted in a machine that could spin a cotton thread better than any other machine.

In 1781 Boulton and Watt invented a steam engine that was easy to use within a cotton factory. By the 1790’s, the steam engine was used in increasing numbers in cotton factories. Therefore there was less reliance of water and the availability of water. Factories tended to be built nearer coalmines as a result.

In the 1800’s the industry witnessed a spread in the use of chemical bleaches and dyes, which meant that bleaching, dyeing and printing could all be done in the same factory.

In 1812, the first decent weaving machine, Robert’s Power Loom, was invented. This meant that all stages in the making of cotton could now be done in one factory.

While some made fortunes from the cotton factories, those who worked in them had no union protection against excessive work, dangerous conditions and low pay – this was to come much later. While a visitor to Arkwright’s Cromford factory described the building as “magnificent” in 1790, conditions inside for a worker were less than magnificent. However, Arkwright was considered to be a decent owner who did go some way to looking after his workforce. Arkwright built cottages for his workers, but they were built so close to the factories that developed Cromford that if a worker had any time off, he or she would not be in a position to get away from the environment in which they worked. He also built a Sunday school for the children who worked at Cromford mill and his best workers were rewarded with bonuses of dairy cows. Arkwright also rented out allotments at cheap rates. But not all factory owners were like Arkwright.

It was also profitable to employ children to do work, as they were cheaper than adults. They were especially useful at crawling under machines to clear up fallen cotton thread and tying together loose ends. With no birth certificates in the early years of factories, no factory manager would find himself blamed for employing underage children, as many children themselves did not know their age. Even when birth certificated were introduced in 1836, child labour did not stop.