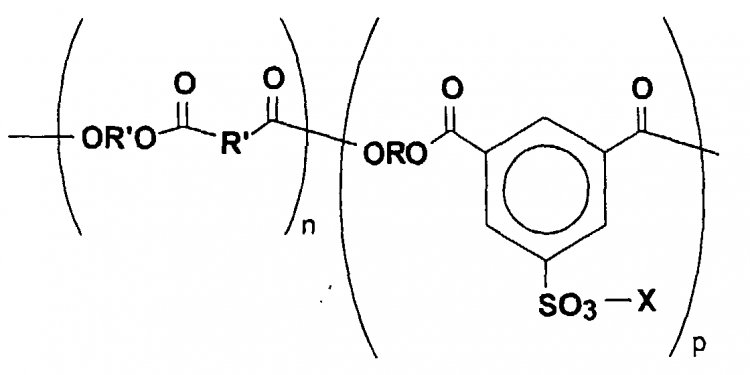 
This image, taken with a scanning electron microscope, shows a bend in a high surface area polyester fiber with a seven-lobed cross section.A soft drink bottle made of PET.

Polyester is the name for a class of polymers that contain the ester functional group in their main chain. Although some types of polyesters can be found in nature, such as the cutin of plant cuticles, the term polyester is usually applied to the artificially synthesized materials. Among the synthetic types of polyester, one of the most important is known as polyethylene terephthalate (PET); another is polycarbonate.

PET fibers are the most widely used manufactured fibers in the United States. Fabrics made from PET fibers are used for apparel and home furnishings. In addition, polyesters are used to make bottles, films, liquid crystal displays, filters, and electrical insulation. Some polyesters are thermosetting resins that are widely used in the bodies of automobiles and yachts.

Thermoplastic polyesters, such as PET, may be heated and processed into different forms, including fibers, sheets, and three-dimensional shapes. Although combustible at high temperatures, polyester tends to shrink away from flames and often self-extinguishes. Woven PET fabrics are used for bed sheets, bedspreads, curtains, and draperies. Polyester fiberfill is also used to stuff pillows, comforters, and cushion padding.

Polyester fabrics sometimes have a "less natural" feel when compared to similarly woven fabrics made from natural fibers, such as cotton. However, polyester fabrics may exhibit other advantages over natural fabrics, particularly improved wrinkle resistance. For this reason, polyester fibers are often spun together with natural fibers, such as cotton, to produce cloth with blended properties.

Close-up of a polyester shirt.

Liquid crystalline polyesters are among the first such polymers to be used industrially. In general, they have extremely good mechanical properties and are very resistant to heat. They can therefore be used for seals in jet engines.

Polyester is also widely used as a finish on high-quality wooden products like guitars, pianos and vehicle/yacht interiors. The thixotropic properties of the sprayable form of polyester make it ideal for use on open-grain timbers, as it can quickly fill the grain and has a high build film thickness per coat. The cured polyester can then be sanded and polished to a high-gloss, durable finish.

Synthesis of polyesters is generally achieved by what are called polycondensation reactions. Some examples of these reactions are given below.

In this classical method, an alcohol and a carboxylic acid react to form a carboxylic ester, with the release of water molecules. For example, to synthesize PET, ethylene glycol (an alcohol with two OH groups) and terephthalic acid (an acid with two carboxyl groups) may be used as the starting materials.

In transesterification, the alkoxy group of an ester compound is exchanged for another alcohol. For example, PET can be synthesized by reacting ethylene glycol with dimethyl terephthalate (the dimethyl ester of terephthalic acid).

Although all thermoplastics are technically recyclable, PET bottle recycling is more practical than many other plastic applications. The primary reason is that plastic carbonated soft drink bottles and water bottles are almost exclusively PET, which makes them more easily identifiable in a recycle stream. PET has a resin identification code of one. Like many other plastics, PET is also an excellent candidate for thermal recycling (incineration), as it is composed of carbon, hydrogen and oxygen with only trace amounts of catalyst elements (no sulfur), and it has the energy content of soft coal.

New World Encyclopedia writers and editors rewrote and completed the Wikipedia article in accordance with New World Encyclopedia standards. This article abides by terms of the Creative Commons CC-by-sa 3.0 License (CC-by-sa), which may be used and disseminated with proper attribution. Credit is due under the terms of this license that can reference both the New World Encyclopedia contributors and the selfless volunteer contributors of the Wikimedia Foundation. To cite this article click here for a list of acceptable citing formats.The history of earlier contributions by wikipedians is accessible to researchers here: