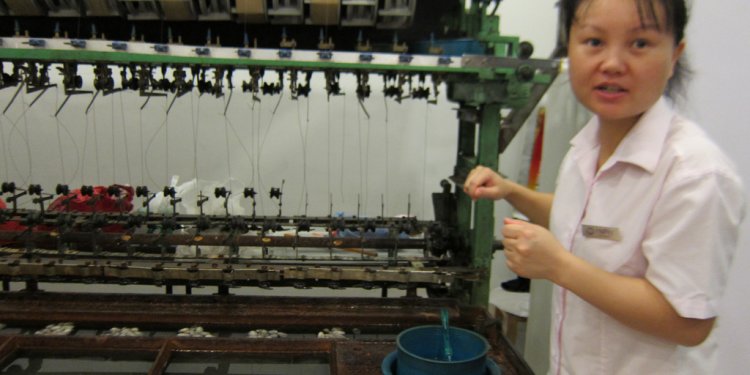 When the mulberry tree looks like this, it's time to take the worm eggs out of the fridge! These catkins are quickly followed by the tender new leaves, the kind that the hatchling silkworms love to eat.

The eggs were taken out of cold storage on March 17. I keep them in a special warm room that I use for drying my soaps; any place that will stay at or above 72' or so will work, but they'll grow faster and be healthier between 78' and 85' F. Healthy eggs are plump and not dessicated. If you look carefully, you can see the caterpillar curled inside some of the eggs. The baby cats are curled head-to-tail like a letter C. Bombyx mori undergo diapause in the egg - similar to hibernation - they pass through the winter in a barely-alive state, and perk up when it gets warm again. Because they're so thoroughly domesticated, these two states are "in the refrigerator" and "out of the refrigerator."

Here, you can see the sophisticated and classy egg-hatching setup. Yes, it's a salad container from a fast food place. There are probably eight or nine hundred eggs here; I just made a guess, selecting some from each of several different batches to ensure genetic diversity. As they grow and need more space, they'll be transferred to big deli trays with lids. I keep a moistened piece of tissue in here, to keep the eggs from dehydrating. Whether you need this or not will depend on your climate.

It's essential that the eggs don't get damp, or mold - if there is condensation on the inside of the lid, it's too moist or the heat source is too direct. March 17, 2004.

It typically takes 10 - 14 days for the eggs to start hatching. It depends on several factors, including temperature, humidity, and the level of development before the eggs went into the fridge. Apparently some of these were ahead of schedule, because they started hatching out in just 7 days. March 24, 2004.

This is what the kegos look like REALLY close up. I got a new camera, and I'm working on re-shooting some of this information - so this is just a taste of the new zoom lens! This caterpillar is about 2 mm. long.

These little guys have to start eating almost immediately, or they dry out and die. You can see the tiny holes they've chewed in the leaves. The hatchling silkworms are called "kego" in Japan, or "chawki silkworm" in India. "Kego" is translated on one Japanese website as "hairy baby" - they are covered with little black hairs.

Here, you can see the size of the hatchlings.

The first few usually hatch a day before, and then the mass hatching starts on the second or third day. This makes easy to rear, because they will go through all their various stages and change simultaneously. Note that the unhatched eggs have a "blue" cast to them - this is because they will hatch soon. Overall hatch rate on this batch was well over 90%. The brown staining on the paper was from the moth. The mass hatching makes them look like a hill of ants; a Chinese name for this stage is "ant silkworm." March 25, 2004.

This is the best way to move the kegos around. This is a synthetic sable #1 brush; anything from a #0 to a #2 will work fine. I find that they need to be "wiped" off the end to put them down on a new leaf. Each worm makes a silk "safety line" and attaches itself to the leaf it's on; that makes them easy to sweep up and move.

This is the third day. The worms have more than doubled in size already. Just above the center of the photo, you can see a tiny new-hatched worm; compare its size to the ones around it, and you can see how much they've grown! Also, you'll notice that instead of just nibbling holes in the leaves, they turn the leaves into lace. The leaves are held together by the veins alone.

NOTE: Raising silkworms is a learning process for me. I keep learning new things - so I'll share them with additions as I go along. I have found a much better way to clean the silkworm trays; check out NETTING UP. Added summer of 2005.

A couple of days later, the kegos are changing their skins! The second-instar worm at the top has already shifted his skin; note the larger face plate and the gray coloring. The worm below is about to change - you can tell because his white shiny skin looks too tight for his body. His tiny face will be replaced by a much larger one, which will allow for faster eating and more growth!

These are second-instar worms with the dime for scale.

This worm has crawled off the leaves to change his skin. I call this "praying" because he looks like he's in prayer or meditating - they sit with their heads lifted up, immobile, their legs folded before them, for hours or even a whole day.

When the worm steps out of its skin, it leaves it behind like this. Imagine someone slipping out of their pants and just leaving them in a puddle on the floor. March 28, 2004