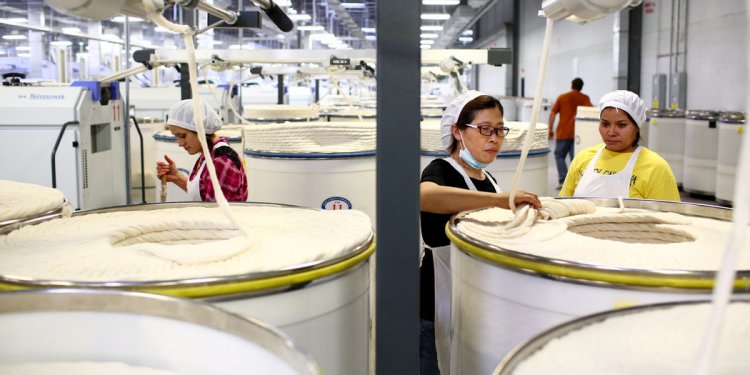 The rise of the textile industry in Georgia was a significant historical development with a profound effect on the state's inhabitants. The narratives surrounding textiles, particularly the cultivation and processing of cotton, form a distinctive industrial heritage that begins with the founding of the Georgia colony in 1732, before cotton dominated the state's agricultural economy and years before Georgia became the South's leading producer of textiles.

During the seventeenth century, when silk became the fashionable fabric for the upper classes in Europe, England hoped to compete with the thriving silk industries in France and Italy. To that end, the colonial trustees developed a plan for textile production in the Georgia colony, and in 1734 General James Edward Oglethorpe established the Trustee Garden in Savannah for agricultural experimentation. Among the plants cultivated in the garden were mulberry trees, the leaves of which were used to feed silkworms. Silk production proved difficult for the untrained Georgia colonists, however, so skilled Italian silk makers were brought in to teach them the process. The colonists attained success within the year; records show that Queen Caroline of England wore a gown made of Georgia silk in 1735.About twenty-five miles northwest of Savannah, the German-speaking Salzburgers of Ebenezer were also attempting to produce silk, and by the late 1730s they had silk operations in place. Seasonal temperature variables, however, were detrimental to the sensitive silkworms and hindered silk production. By the 1780s the hardier and more lucrative cotton crop was being cultivated as a replacement for silk, yet silk production did not die completely in Georgia. As late as the 1830s, some communities, including the town of Canton in Cherokee County, were still attempting to manufacture it. Named for the silk city of the same name in China, Canton was ultimately unsuccessful at establishing a silk center.

The Emergence of Cotton Production

The cotton gin, invented in the 1790s by Eli Whitney at Catharine Greene's Mulberry Grove plantation in Chatham County, turned cotton into a profitable crop for plantation owners. An industry centered strictly on cotton textile production in the state, however, was still decades away.After the War of 1812 (1812-15) some southern leaders, in an attempt to duplicate the prosperity of cotton mills in New England, built textile factories in the South. The earliest of these mills in Georgia were the Antioch Factory in Morgan County and the Bolton Factory in Wilkes County. Both factories, built around 1810, had failed by the early 1820s, probably due to the more rural-focused economy and sparse population. The idea of textile mills as a means of commerce resurfaced when an economic depression in 1837 required alternate sources of revenue for southern businessmen. Simultaneously, more land was becoming available for cotton cultivation in central and west Georgia after the removal of the Creek Indians.The textile manufacturing establishments that emerged after this time were small mills, limited in size and scope, that produced coarse fabrics for grain sacks. The locations of these factories were confined to areas in which swiftly moving waterways could be harnessed to power the mill machinery. As a result, the mills were located along the fall line, a land area several miles wide that runs along the border between the hilly Piedmont region and the Upper Coastal Plain, from Columbus to Augusta. The fall line marks the prehistoric ocean's shoreline; land north of it is higher in elevation than the land to the south. As a result, waterways along the fall line pick up speed as they drop to a lower elevation.The topography along the fall line may have been right for mill operations, but the lack of easy access to a white workforce led the first mill operators, also plantation owners, to use their slaves as workers. Other factories employed members of local farm families when they were available.Two prominent Georgians were involved in the state's first successful mills. In 1829 Augustin Smith Clayton, a well-known lawyer and judge, and his business partners opened the Georgia Factory in Athens, on the banks of the north Oconee River. This mill location also became the site of Whitehall, Georgia's first mill village, when the property was sold to John White in 1835. (Whitehall is now part of the University of Georgia campus.) Around the same time William Schley, a Georgia governor, constructed the Richmond Factory on Spirit Creek in Augusta in 1834. Encouraged by these profitable enterprises, other businessmen also ventured into the industry. By 1840 nineteen textile mills were in production in Georgia. The mills were becoming larger, too; one of the largest was Roswell Manufacturing of Cobb County, which opened in 1839.

Sensing the emergence of a profitable enterprise for their state, political leaders passed legislation making it easier for potential mill operators to incorporate their businesses. The industry began to flourish, and by 1850 Georgia had thirty-eight textile mills. The cloth produced in the mills evolved from the early coarse fabrics, sometimes called "Georgia wool, " to cotton duck, a heavier canvaslike material. Most of the regional mills in operation at this time were small, with fewer than 2, 000 spindles and 100 workers. Often these mills were situated next to the local gristmills, flour mills, and sawmills.

In Georgia's emerging cities, however, factories tended to be larger. One example was Eagle Manufacturing Company in Columbus, opened in 1851 by William H. Young, a native New Yorker. The growth of the textile industry in Georgia, along with the population increase and expansion of railroads in the state, prompted William "Parson" Brownlow, the editor of a Tennessee newspaper, to call Georgia "the New England of the South" in 1849.

As the 1850s progressed, Georgia mill owners focused on improving rather than expanding their factories. Employees, by then strictly composed of rural whites from areas surrounding the mills, were developing into a skilled workforce. Some owners in the state encouraged seasoned northern mill workers to relocate to Georgia factories, where they could pass along their experience to local workers; some experienced mill workers came from as far away as England.